Vera celebrates her 100th birthday with party and concert

Vera Holloway who lives at Home of Compassion Care Home celebrated her 100th birthday with a jam-packed weekend including a special afternoon tea and concert.

On Saturday 12th November, the bistro was decorated by some of the residents for Vera’s 100th birthday party with her family.

A party was also held the next day for both Vera’s 100th and fellow resident Dorothy’s 95th birthdays with their family members and residents attending. Toasts were made, cake was enjoyed and everyone sang Happy Birthday followed by for “They” Are Jolly Good Fellows.

Vera enjoys music so it was fitting to have piano singalong duo Baz & Dave providing the entertainment with several London songs that got everyone singing and dancing. A group of relatives joined them wearing police hats and sang The Laughing Policeman which had everyone laughing. Later some of the men and women sang a song from Grease where they had to respond to each other’s singing which was very entertaining.

Health and Wellbeing Lead Raquel gifted Vera and Dorothy with flowers and a card from everyone at the Home and reflected on those who couldn’t be there but had sent their best wishes which the residents and their families were very touched by.

Vera was also amongst one of the first to receive a 100th birthday card from King Charles III and the Queen Consort.

Vera has been a resident at Home of Compassion since May this year. She met her husband Dennis at school and has four children who she loves dearly. She worked as a seamstress during the war and was very skilled and talented at making beautiful ball gowns and formal dresses.

When asked about the secret of living such a long life, Vera puts it all down to her love of keeping active. Vera used to belong to the Women’s League of Health and Beauty, a programme of fitness classes for women that was introduced in the 1930s by Mary Bagot Stack. The group’s basic exercise principles continue to this day under the revised name of Flexercise.

Pearl Hope, Regional Support Manager said, “Vera was delighted to receive a birthday card from King Charles III and the Queen Consort. Vera enjoys her own company but is a very kind soul and loved her husband, Dennis, dearly. She very much loves her family. Happy birthday Vera!”

Home of Compassion Care Home provides residential, nursing and dementia care on a permanent or short stay basis. If you are looking for a care home and want to find out more about our home call freephone 0808 223 5406. 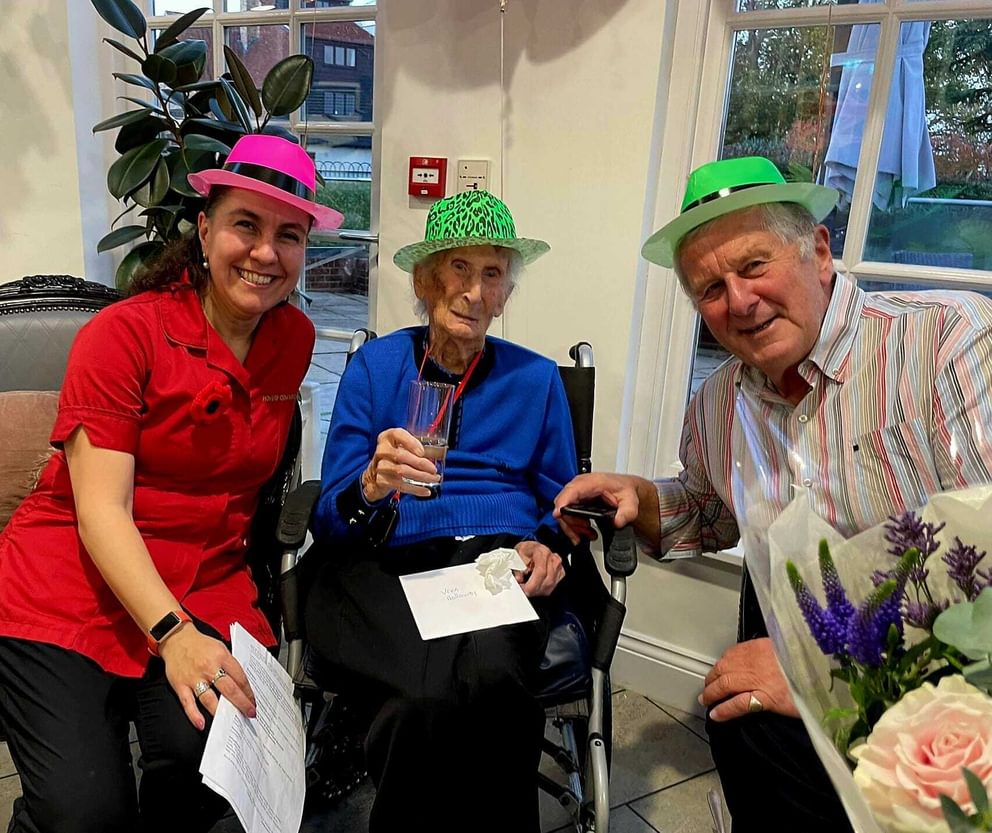 0808 223 5406
Home of Compassion is a Grade II* listed mansion set on the banks of the river Thames in the desirable village of Thames Ditton and has all the amenities of a modern home. We offer residential, nursing and dementia care. If you’re a little unsure of what type of care will be needed, we’re happy to help with the details.

Last year we helped over 5,000 families find the right care with free advice on anything from funding care to finding the right home and moving in.

We can help with advice on paying for care and how funding works. We can check availability in all of our homes and send you the latest brochure. If you'd like to meet our Home Manager, we'll book an appointment at a time to suit you.

You may need to allow permission in your browser.

We found you in this area:


Homes will be given within an approximate 10 mile radius of this location.
Or

Find care homes near you

Please enter a postcode below.

Sorry, we couldn't match a location.

Our care team are here to help you